Unable to secure even a simple birthday party invitation, Kayumba Nyamwasa is forced to watch African Leaders invited to the G7 meeting. Allergic to success stories, he posts on His Robert Patrick Fati Gakwerere page an attack piece claiming African leaders were kept out.

The participation of African leaders hurts him more as his role model in nepotism, Yoweri Museveni, also did not manage to get an invitation. Worst of all, the one person he smear day and night, the President of Rwanda, was invited. Kayumba Nyamwasa must be feeling his insides painfully turn with rage and jealousy. 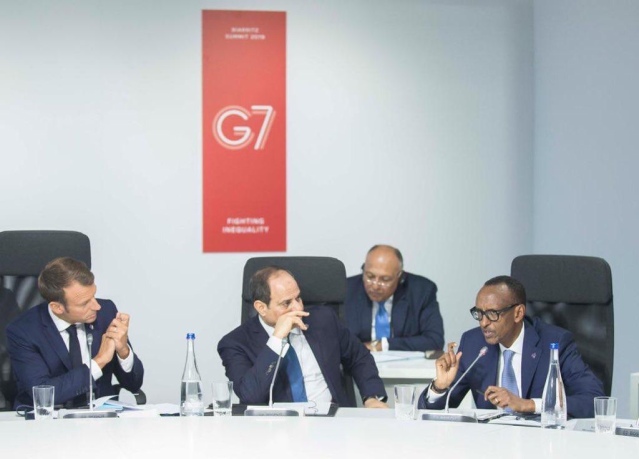 As a fugitive, he spends his time worrying about the possibility of facing justice and although he is not in jail for his crimes, unable to attend any public event, Kayumba has effectively no real freedom of movement. As for his second most important sponsor Yoweri Museveni, world leaders are embarrassed by his mere presence, he is simply to corrupt to seat with.

African Leaders at the G7 Summit

After all, the American President who is at the G7 summit might accidentally refer to Museveni as corrupt #Exhibit 1510 as he is known in US courtroom. Eminem, an American rapper, became popular with his real slim shady ‘please stand up’ song, someone aught to tell Kayumba Nyamwasa to ‘please seat down’!